Our current immunoliposomal nanovector prototypes will be improved to make them an option for severe malaria cases or in a future scenario of malaria eradication, which will likely demand i.v. administration of new drugs targeted to hyper-resistant parasite strains. Emphasis will be placed on the development of new targeting molecules against Plasmodium-infected cells such as heparin derivatives and DNA aptamers, whose reduced cost and fast production, respectively, makes them preferred alternatives to antibodies. A promising new avenue that we will continue exploring after having obtained good preliminary results is the targeting of antimalarial drug-loaded immunoliposomes to all RBCs, both infected and non-infected. We plan to develop new types of combination therapies at the nanoscale where we place together in the same liposomal nanovector two or more antimalarial activities.

Investigation of new nanovectors for the delivery of antimalarials to the mosquito stages of Plasmodium
(Elena Lantero, PhD student)

The recent appreciation that decreasing malaria prevalence demands strategies to reduce transmission between humans and mosquitoes has prompted a search for approaches targeting stages in the insect vector. The three elements in the nanovector design (encapsulating structures, drugs, and targeting molecules), will be exchanged as LEGO parts to assemble multifunctional nanovessels that can be modulable (improved function), adaptable (new targets) and versatile (combination of different structures in multifunctional entities), with the challenge in sight of delivering drugs targeted to Plasmodium forms exclusively found in Anopheles, opening a whole new perspective on the possibilities of nanomedicine. Such a strategy, which can be designed for administering antimalarials directly to mosquitoes, not to humans, would bypass lengthy and costly clinical trials that often delay for years (and in the case of malaria often preclude) the development and deployment of new medicines.

(i) The presence of the methyl erythritol phosphate pathway of isoprenoid biosynthesis in bacteria and in apicoplastidic parasites and its absence from animals makes of it a preferred target for the development of new antibiotics and antimalarials. We endeavour to block this metabolic route, which is essential for the viability of the pathogens that possess it, by obtaining DNA aptamers specifically binding its enzymes and inactivating them.

(ii) Investigation of protein aggregation as a new antimalarial target. Proteins with large stretches of low-complexity regions enriched in glutamine/asparagine (Q/N) repeats have a propensity to form insoluble intracellular aggregates which can lead to cell death by propagating aberrant interactions. In most species the fraction of Q/N repeat-containing proteins is less than 1% of the size of the proteome, but in Plasmodium falciparum this proportion rises to an astonishing 30%, found in all protein families in all developmental stages. In bacteria, the cytotoxicity of protein aggregation has been successfully used to kill the pathogen without affecting the mammalian host, supporting the hypothesis that protein aggregation might be harnessed to be developed into new antimicrobials against a wide range of parasites, including Plasmodium. We intend to investigate the effect on Plasmodium of endogenous aggregative peptides and their extracellular vesicle-mediated transit among parasite-infected red blood cells as the basis for a potential new antimalarial strategy. The results obtained could eventually lead to the design of innovative therapies against malaria based on the potential toxicity for the parasite of (i) an externally induced uncontrolled aggregation of its own proteome, or (ii) the prevention of protein aggregation, if this phenomenon had a functional role for the pathogen’s survival. Nanotechnological tools developed in our group for the targeted delivery of antimalarial drugs will be used for the encapsulation in immunoliposomal and polymeric chitosan/heparin nanocarriers of protein aggregation-promoting peptides. As parasite target cells will be explored blood stages infecting erythrocytes and also the ookinete stage found in the mosquito vector, the latter in preparation for potential future methods for the direct delivery of transmission-blocking antimalarial drugs to mosquitoes. Upsetting the proteostatic machinery of Plasmodium might simultaneously affect several gene products, thus reducing the likelihood of resistance evolution. 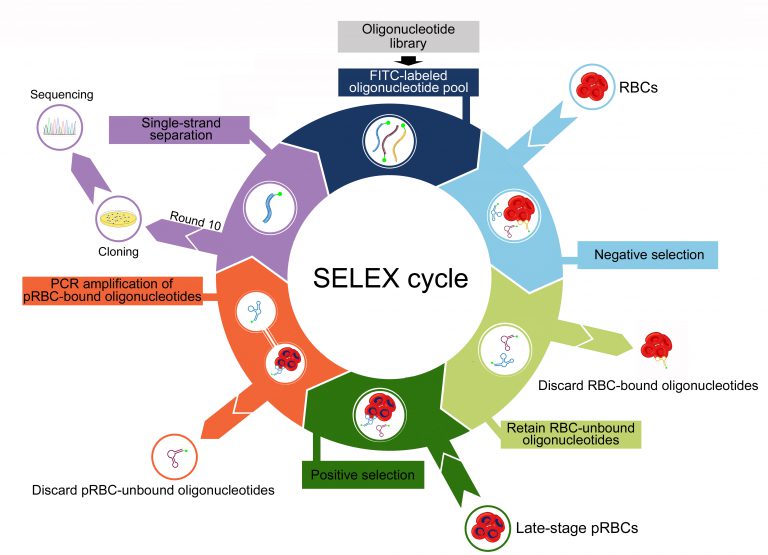 The World Health Organization has launched an ambitious plan to eradicate malaria, which will require population mass screening and treatment. In this context, the current diagnostic gold standard is light microscopy, which is time and labor intensive, and needs prepared personnel and continuous training. Alternatively, antigen-based rapid tests have limited sensitivity and do not provide quantitative measure; and PCR-based molecular methods, although sensitive, demand for relatively expensive equipment. Accordingly, malaria massive screening will require new rapid, sensitive, simple and economically affordable methods, able to detect even asymptomatic infected patients and low-density infections. New biomarkers will have to be discovered in order to improve the performance of current antigen-based malaria rapid diagnosis. Antibody production often involves the use of laboratory animals and is time-consuming and costly, especially when the target is Plasmodium, whose variable antigen expression complicates the development of long-lived biomarkers. To circumvent these obstacles we will apply the Systematic Evolution of Ligands by EXponential enrichment (SELEX) method to the rapid identification of DNA aptamers against Plasmodium-infected red blood cells (pRBCs). This type of synthetic ligand is expected to display higher dry-storage and lyophilisation stability than antibodies. Five 70 bp-long ssDNA sequences having a highly specific binding of pRBCs versus non-infected erythrocytes have been so far identified.

Exploring the role of the ESCRT machinery in the release of extracellular vesicles during Plasmodium infection
(Yunuen Ávalos-Padilla, postdoctoral fellow)

During Plasmodium infection, different studies have reported an elevated number of circulating extracellular vesicles (EVs) from numerous cellular sources and they also have demonstrated that the severity of the disease correlates with the number of EVs in the plasma. Although EVs derived from Plasmodium-infected red blood cells are supposed to play a role in the parasite’s virulence mechanisms, little is known about EV genesis in this pathogen and its potential as therapeutic target. Generally, EVs are generated by two mechanisms: (1) release of exosomes following the fusion of multivesicular bodies with the plasma membrane, and (2) microvesicle formation by direct membrane shedding. In both cases, the Endosomal Sorting Complex Required for Transport (ESCRT), which consists of four complexes (ESCRT-0, ESCRT-I, ESCRT-II and ESCRT-III), can be involved. The mechanism for ESCRT-mediated processes begins with the sequential recruiting of its complexes and ends with the polymerization of ESCRT-III (composed by Vps20, Vps32, Vps24 and Vps2) and its accessory proteins. Besides this canonical activation pathway, ESCRT-III can be recruited to the membrane without requiring the other ESCRT complexes. In humans, ALIX, a Bro1 domain protein, has been found to directly bind Vps32 and trigger the formation of ESCRT-III polymers leading to EV formation. This alternative mechanism can be occurring in Plasmodium since it lacks the genes encoding for upstream ESCRT components, although this has never been explored.

Given the importance of ESCRT-III membrane-related processes and the high vesicular traffic associated to Plasmodium virulence mechanisms, our general aims are to explore the activation pathway and role of ESCRT-III in the virulence of Plasmodium to find new molecules for possible therapeutic targets.

The leishmaniases are poverty-related parasitic diseases transmitted by sandflies and caused by protist parasites of the genus Leishmania, of which about 20 species are pathogenic for humans. Leishmania replicates in the macrophages of a mammal host as amastigotes, which when picked up by the sandfly vector transform into flagellated promastigotes. The hidden location of amastigotes inside the macrophage’s phagolysosomes is responsible for impairing the accession of therapeutic drugs, rendering these poorly selective, or forcing their administration in repeated and high doses by parenteral routes. These facts contribute to the high toxicity and in most cases to the limited efficacy of current conventional medications used against the clinical forms of leishmaniasis. To solve these problems, the rapidly growing nanotechnology field has a clear applicability to infectious disease treatment, particularly in the design of targeted nanovectors. These specific drug delivery systems should carry the drug to the target site and control its release, enhancing antileishmanial activity and reducing the toxicity of active ingredients. Among the different delivery systems, liposomes are ideal carriers of drugs against leishmania parasites because they (i) can provide sustained and/or prolonged drug release, (ii) passively target macrophages thus improving the drug bio-distribution in target organs such as lungs, liver and spleen, and (iii) positively address the topical application of drugs. Indeed, liposomes, when administered in vivo by a variety of routes, rapidly accumulate in the mononuclear phagocyte system, a phenomenon that can be used to target drugs for the treatment of intracellular parasites that reside in macrophages, such as Leishmania.

Combinations of phospholipids with other specific components (surfactants, cosolvents or polymers), will be assayed to design innovative targeted vesicular nanoformulations able to stably incorporate high amounts of antileishmanial drugs (e.g. meglumine antimoniate, amphotericin B and miltefosine) and capable of reducing their toxicity and increasing their efficacy through a targeted delivery to parasite cells. Simultaneously, other natural and beneficial molecules, such as curcumin and quercetin, will be co-loaded as therapeutic and technological adjuvants. The targeted cells will be Leishmania amastigotes inside macrophages and also the free promastigotes transmitted by the sandfly vector. If required, specific ligands for macrophages (e.g. mannose residues) and parasites (e.g. heparin) will be used to target the vesicles.

Also in this section

Send us your inquiry

Any cookies that may not be particularly necessary for the website to function and is used specifically to collect user personal data via analytics, ads, other embedded contents are termed as non-necessary cookies. It is mandatory to procure user consent prior to running these cookies on your website.